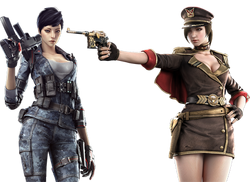 Flying Fox is a female character featured in CrossFire.

Judging by its form, the Black List form of the Flying Fox looks like a mix of S.T.A.R and Arch. The character features a female commander-like form, showing a full body-buttoned brown officer dress with a short skirt, a belt buckle with an eagle design, a pistol holder, a knife holder on her legs, matching officer shoulder padding, a neck choker, a cape, a pair of brown gloves and a beret hat with an eagle sign on it.

In Global Risk form, she looks like the ULP (in GR form) but sleek and skinnier than the ULP. The character features a dark blue digital camo on her suit with a gray undershirt, several magazine holders, knife holder, a pair of high-heeled black boots and a sleek dark blue hair.

Flying Fox uses a unique voice set in CF China (named ChineseWoman2), similar to Orchid. It appears to be based on the Flying Tigers' voice set.

Retrieved from "https://crossfirefps.fandom.com/wiki/Flying_Fox?oldid=195024"
Community content is available under CC-BY-SA unless otherwise noted.