Fever System is a feature that award players for being online into the game. After specific interval, the system will reach certain milestone, which all gives items, game points and experience points. Available in the following versions:

Fever System gives rewards when connected, staying on lobby or playing fills up the bar. Also, when playing the bar fills 3x faster. There are milestones at 33% and 66%, which award players some of the following items once reached:

Additionally, players may stand a chance to win "Big Luck" when the bar reaches its milestones if they are in the middle of a match (The system will inform players about it at the Result screen). In this event, the next milestones will be reached immediately (And the bar will fill up if players are already at 66%).

The bar will fill up 1% for every 1 minute idleing or 3% for 1 minute playing. When players finished filling the bar, it will slowly drain while applying bonus effect. Note that the bar will drain by itself even if players already log off the game. Until the bar depleted, it cannot be filled again.

Depend on each server, Fever bar may fill faster, gives out more perks and drain slower during Weekends in some servers (North America, Indonesia and Vietnam). Additionally, players who own the Thompson Infernal Dragon gains 20% boost of the fill rate for Fever bar, making it much easier to reach F3 stage in a short time. Servers with Attendance System updated will reward players with 50% fever bar on specific days as well. 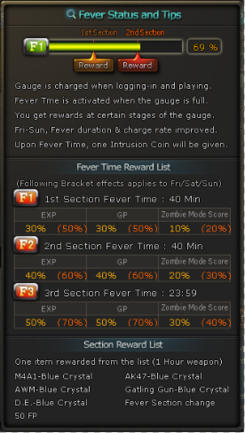 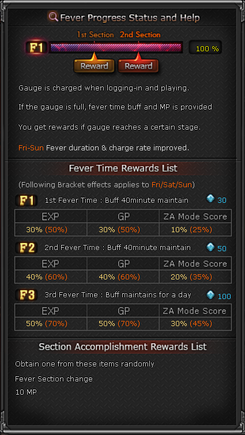