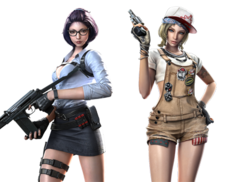 FOX Undercover is a female character in CrossFire.

As the title suggests, FOX now goes undercover (like a spy/agent) and wears a more casual outfit for both GR and BL team.

Based on their looks and outfits, both BL and GR retains the same face of the original FOX, yet their clothes are changed. The Black List soldier, wears a street thug-like form. She wears a white abdominal-revealing t-shirt, a short brown jumper with various patches around it with overlapping pockets and torn parts at the bottom, black and white necklaces, several bangles in both hands, a FOX tattoo on her left arm, a pair of black and brown gloves, a pair of sleek sneaker-like high heels, a blue bandana and a cap with a design of a red-outlined sun with three stars surrounding it.

On the Global Risk form, she presents a business woman look. She wears a long-sleeved front-revealing white polo, a black skirt, weapon straps on her hips, on the left leg and chest, high-heeled shoes, a pair of black gloves, and eyeglasses.

GR Artwork
Add a photo to this gallery

CF Fox Undercover
Add a photo to this gallery
Retrieved from "https://crossfirefps.fandom.com/wiki/FOX_Undercover?oldid=196975"
Community content is available under CC-BY-SA unless otherwise noted.