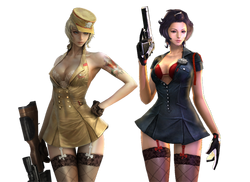 FOX is considered by lots of players to be the sexiest character, and this reputation still stands by today. The GR character wears a dark blue skirt with neck buttons undone, partially revealing her bra, while BL wears a similar yellow version but has no sleeves, to showcase a tattoo on her left arm plus she has a cap on. Both characters wear long socks and high heels as well.

Seaside
Add a photo to this gallery

FOX-Sweet Girl Dress is another outfit for FOX. The outfit features more purple color on the BL side and green-blue color on the GR side. Her HUD also got changed. It is currently available in the following versions:

Retrieved from "https://crossfirefps.fandom.com/wiki/FOX?oldid=194073"
Community content is available under CC-BY-SA unless otherwise noted.