FAMAS G2 is an assault rifle variant of FAMAS F1 featured in CrossFire.

The FAMAS G2 was developed circa 1994 to bring the rifle more in compliance with NATO standards by having tighter rifling and accepting standard NATO magazines, but also included several other upgrades taken from the previous model.

This weapon becomes the secondary issue for the French Army, since the FAMAS F1 still remains the primary service rifle of the Army before being replaced by HK416K in 2017.

Differently from the original FAMAS, this weapon performs much better. It has higher accuracy, higher damage, faster firing speed, faster reloading speed, and faster drawing speed. It also has lower recoil as well. It has a standard 30-round magazine with 90 in reserve, and it still features 3-shot burst mode.

Due to its overwhelming advantages, this gun is a good choice for anybody who want to play against JHP-ammunation SMGs or other OPed weapons.

Neon Pink
Add a photo to this gallery 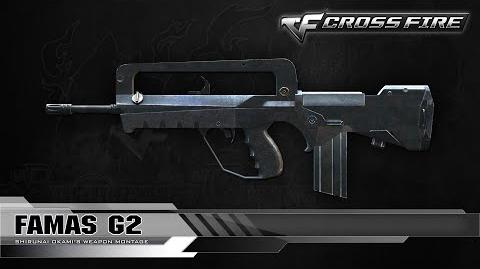 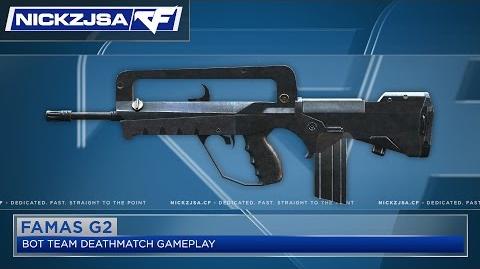 FAMAS G2 - CROSSFIRE China 2.0
Add a photo to this gallery

Retrieved from "https://crossfirefps.fandom.com/wiki/FAMAS_G2?oldid=188784"
Community content is available under CC-BY-SA unless otherwise noted.