FAMAS F1 (or simply FAMAS) is an assault rifle featured in Crossfire.

FAMAS is a bullpup-styled assault rifle designed and manufactured in France, served as the service rifle of the French military before being replaced by HK416F in 2017.

In the game, FAMAS holds an ammo count of 25 with 75 in reserve, which is unfortunate considering the FAMAS's high firing rate will make it run dry fast. A quick reload can mitigate the pain of reloading often, though. This gun is also one of few assault rifles that has an alternate firing mode in the form of a 3-round burst. While this mode helps to educate newer players to not spray and make their shots count, it is unnecessary to more experienced players as you can fire a 3-round burst faster in fully automatic mode than in the 3-burst mode. It should be noted that the three round burst, similar to the XM8-Adv burst, is ideal at mid to far distances as the bullet placement allows for multiple shots to hit. The FAMAS does not deals 1-shot headshot unless at close ranges. Due to its considerable drawbacks, the FAMAS is rarely seen in-game.

Camo
Add a photo to this gallery

Spray pattern
Add a photo to this gallery 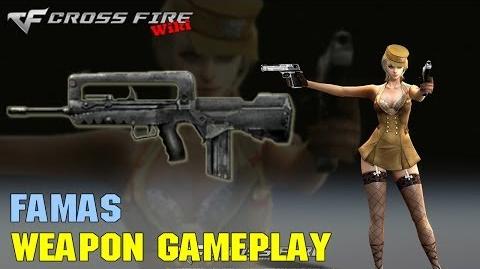 CrossFire - FAMAS - Weapon Gameplay
Add a photo to this gallery
Retrieved from "https://crossfirefps.fandom.com/wiki/FAMAS?oldid=184557"
Community content is available under CC-BY-SA unless otherwise noted.