Start a Wiki
Evil Mansion is the third Elite PVE Mode map, which is located at a lone mansion in a dark forest. It is a remake of the Mansion map from Hero Mode X, which is now under attack by a horde of zombies and terminators, under the wings of the Fusion Terminator.

Soldiers start off inside the mansion, assisted by auxiliary non-playable soldiers, fending off against zombies trying to break barricades by the windows. By the third wave, a trio of Havoc will spawn and run amok until their defeat, which will cause the mansion to burn down, thus forcing soldiers to get outside.

Once outside, soldiers are joined by the Hero using his signature FAL Custom-Camo, who is definitely a great asset, as he provides a buff once in a while. By the fifth wave, a evil pairing of terminators spawn and start causing trouble. Upon their defeat, both of their souls will escape their body and fuse together, thus creating the Fusion Terminator.

As mentioned, soldiers are not alone in this mission, as they are assisted by eight AI-controlled mercenaries as they cover the windows of the main floor, preventing zombies from entering the mansion. If the zombies manage to break barricades by the windows, they will finally enter and may infect the auxiliaries, thus turning them into mutants.

Upon stepping outside, soldiers get to meet with the Hero, who will gladly help them destroy any withstanding enemies using his signature weapon. At times, he will let out a war cry, thus granting a temporary buff to soldiers. However, just like previous reinforcements, he can also get infected if defeated, which will turn him into a Dread enemy.

During the third wave, a trio of Havoc (only one or two on lower stages) will spawn outside and make their way towards the mansion, potentially blocked by any remaining barricades. Upon entering, they will chase down the soldiers while using their few abilities until their defeat, thus sending the troop outside.
During the fifth wave, a pair of Terminator will spawn and start chasing down the soldiers, using a variety of attacks. Once one of them dies, a short-timer starts, which will lead to its resurrection with a smaller pool of health unless the other dies before that happens, so soldiers should aim to kill them almost simultaneously.
During the final wave, a cut-scene shows the souls of both terminators leaving their bodies to fuse together to form the ultimate terminator: Fusion Terminator. This imposing force summons their prior hosts in form of various attacks, thus making it a very dangerous foe. 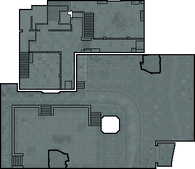