Dual Kukri is a special melee variant of the Kukri available only in Hero Mode X. It's the weapon of choice of Commando, equivalent to Nemesis' Dual Axes.

Both Kukris have a unique reddish skin with rings attached on the blade - they are held in both hand with the right one facing downward. The primary attack consists of two quick slashes, each deal 1400 damage to mutants (body hit). Secondary attack has Commando holds back both Kukris to the center then slash them at once, deal up to 4200 damage. 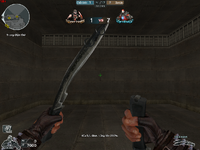 HUD (Blank Kukris)
Add a photo to this gallery 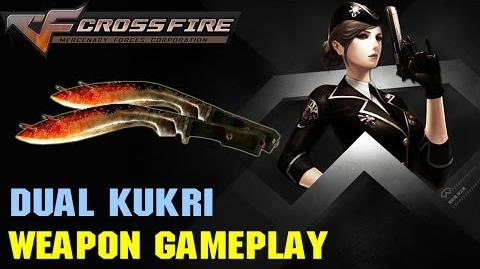 CrossFire VN - Dual Kukri
Add a photo to this gallery
Retrieved from "https://crossfirefps.fandom.com/wiki/Dual_Kukri?oldid=194375"
Community content is available under CC-BY-SA unless otherwise noted.