Dragon Blade is a Chinese melee weapon featured in CrossFire.

The Dragon Blade sword has a dragon shaped blade with intricate carving that is chained to the hilt. It has a similar shape with the Ghost Blade wielded by Knights in Mutation Knight Mode.

This weapon has a fast primary attack (On pair with Persona Blade), has great range, and has a lighter weight than other swords like the Katana and Xuan Yuan Sword. The primary attack can one-hit kill with Headshot (88 HP with armor), while the secondary attack is a long range 2-hit combo consisting of a heavy slash followed by a frontal stab, both dealing lethal 1-hit kill damage.

The first slash of the secondary attack/RMB is a wide area swing that can hit multiple enemies (similar to the Kukri), while the second stab is a precise stab that needs to be aimed directly at the enemy to connect.

Being an Anti-Zombie Weapon, Dragon Blade features a charging bar in ZM - when it's full, pressing 3 will make player character extend the chain out and do a 3-slash combo then one frontal downward stab, before drawing back the blade inside. Using this attack slows down players significantly, but they're immune to all damage dealt by zombies or bosses.

Silver Hsi Yu Chi
Add a photo to this gallery 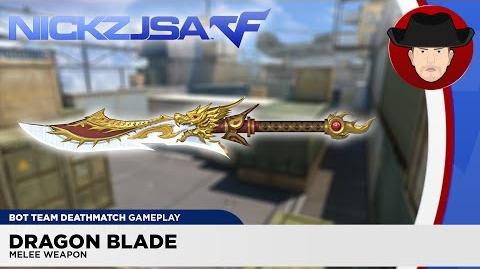 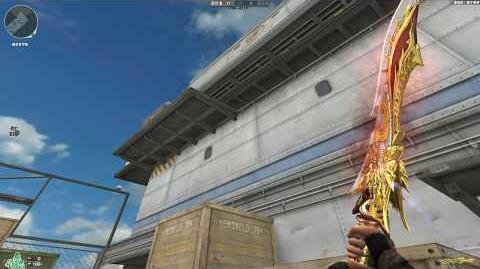 Cross Fire China Dragon Blade !
Add a photo to this gallery
Retrieved from "https://crossfirefps.fandom.com/wiki/Dragon_Blade?oldid=202268"
Community content is available under CC-BY-SA unless otherwise noted.