Desert Eagle-Canadian is a patriotic variant of the Desert Eagle in CrossFire.

This particular Desert Eagle has been given the Canadian flag's scheme (red and white), whilst having the flag's maple leaf painted on the pistol's slide. It comes with a 9-round magazine (+2), enhanced stability, and a faster reload speed compared to the standard DE.

Desert Eagle-Canadian is a skin designed by a community member: svanced, as part of CrossFire West's Show Your Skin contest. 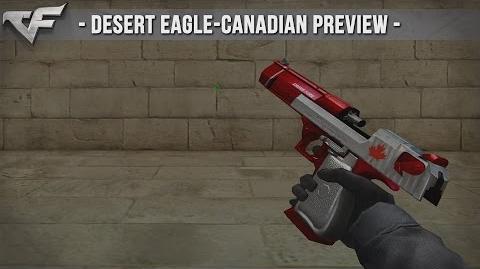 Retrieved from "https://crossfirefps.fandom.com/wiki/Desert_Eagle-Canadian?oldid=206848"
Community content is available under CC-BY-SA unless otherwise noted.