Character Upgrade System is an upgrading system for characters in CrossFire.

Like the name suggested, this system can upgrade some certain in-game characters (various between versions) that players can upgrade characters by customizing favored skills based on players' needs. Characters can be upgraded up to two, three, or four skills with various options provided.

Besides the common skills which can be found in characters obtainable from AI Ticket, this system now features permanent items and more skills specialized in certain modes. These skills are categorized as Normal Skills (colored blue) and Special Skills (colored gold). Both can be randomly swapped by using Character Option Change Card (obtainable from Item Shop, Mileage Shop or from Reward Crates in Zombie Mode) or can be extracted by using Character Option Extraction Card thus said skills will be saved in the extraction tab storage for later use.

Players can use one Character Option Change Card to see other new skills, and decide whether to keep the old one or use the new one (similar to Accessory System). Players can use 10 cards at once to see the list of 11 skills (10 from the cards, and 1 from additional bonus skills) provided and decide which skill to choose.

These are the skills that players can pick based on players' playstyle. Notice that old characters which are firstly released (depending on servers) don't feature new skills, such as Reload-Skipped Skill or Reduced Cooling Time in Mutation Mode; furthermore, some skills are exclusively available for specific characters. 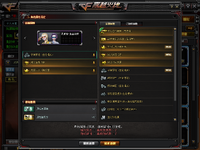