COP 357 Derringer (or simply COP 357) is a small but powerful pistol in CrossFire.

COP 357 Derringer is a quadruple barrel derringer chambered for .357 Magnum.

This weapon is quite deadly, capable of 2-3 hit kills (body shot) or 1-hit kill (headshot) against armored opponents at short to medium distance. It has a very fast firing rate, beating Mauser M1896 and only slightly slower than 687 EDP (Which is also a break-open gun). Despite its powerful damage, its recoil is very low. Its draw speed is also very fast, making it a great backup gun.

The main drawback of COP 357 is its small capacity, holding only 4 rounds in its chambers, but it has a fairly short reload time to compensate for this weakness. It also produces a loud firing sound, allowing enemies to easily identify COP 357's users.

The COP 357 is quite robust in design and construction. It is made of solid stainless steel components. Four .357 Magnum cartridges are loaded into the four separate chambers by sliding a latch that "pops-up" the barrel for loading purposes, similar to top-break shotguns. Each of the four chambers has its dedicated firing pin. It uses an internal hammer, which is activated by depressing the trigger to hit a ratcheting/rotating striker that in turn strikes one firing pin at a time.

Ultimate Goldsmith
Add a photo to this gallery 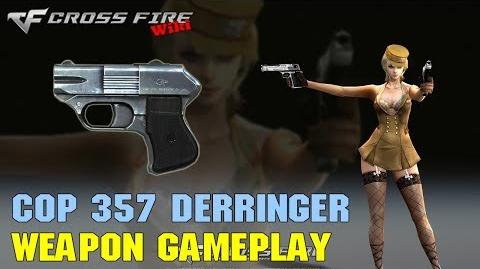