Start a Wiki
Bot Team DeathMatch is a Team DeathMatch variant where soldiers fight alongside and/or against AI Bots. The bots come with various ranks, which represent their difficulty / skill level.

Therefore each bots have different ranks, but does remains within the interval of difficulty the host has chosen. There is also an option to play alone - choosing it will bring up the Quick Room Setup menu, and confirming these settings will launch the match immediately.

In this new variation, both team can have up to four players and four bots per teams; which then face off in various Team DeathMatch maps. Whenever a bot is removed from one side, one from the other will be removed as well. The single player option is not available for this.

The game goal and respawn time are obviously the same as Team DeathMatch. The host can select either kills or time, which range from 40 to 150; or 5 to 12 minutes respectively. The respawn time range from 0 to 10 seconds, excluding CF Vietnam and CF Japan which disallow changing this option.

EXP & GP earned in this mode are quite low, but playing on higher bot difficulty setting will allow for significantly higher income - note that playing alone will NOT earn players any EXP/GP. Kills/deaths accumulated will not affect players' profile result and badge training, but there are one Achievements related to this mode.

The difficulty of the bots are indicated by their ranks, which is set by the room host. Their difficulty will obviously affect their reaction time, overall AI, but also their weapons. Surprisingly, on higher difficulties, bots will be using high tier weapons, reskins included (i.e KSG-15 Halloween, Dual Karambit, etc).

Players will be able to pick up most of said weapons if they so desired as the bots will also drop their primary weapons upon death (Does not apply to servers that disallow Black Market items to be dropped upon death). Here are the difficulty options:

It should be noted that on Medium and higher difficulty, bots are fully armored so they can take more bullets before dying (much like players). Also due to an oversight, they are able to fire Shotguns much more effective from distance, sometimes with unfair increased rate.

The host can set a global weapon restriction for everybody in the room, but additionally, the host can also force the bots to use a certain type of weapon, which leave the players with the ability to bring whichever weapons they want:

As of now, there are a few classic maps available - more maps will be available eventually, once their AI path are coded on other maps. Note that the available maps vary from a version to another, but here's the current map list for this mode: 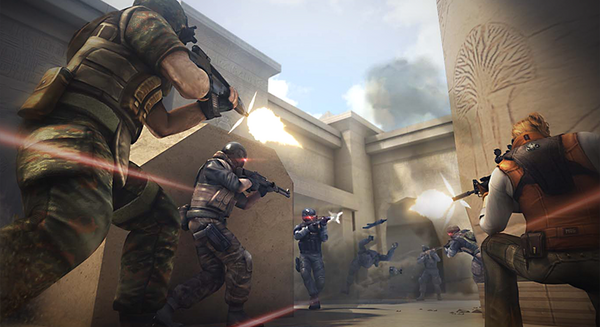 Bot Ranks.
Add a photo to this gallery
Retrieved from "https://crossfirefps.fandom.com/wiki/Bot_Team_Deathmatch?oldid=182193"
Community content is available under CC-BY-SA unless otherwise noted.