Armored Engineer (Metal Butcher as the translation from CF China) is a relatively large golem armed to the teeth with heavy weaponry, including cannon blasters and a chained cannonball with spikes. He also wears various armor pieces which can be destroyed.

The boss is very reminiscent of the Heavy Titan boss (and its counterparts), due to his charge and explosives based attacks. Therefore he's a force to be reckoned with in close quarter combat but can also occasionally deal a good amount of damage at large distance too.

This boss always variates between the following set of attacks, as it doesn't show any particular rage based changes once its health drops below half. Although his blaster will shoot more bombs as its health descent. 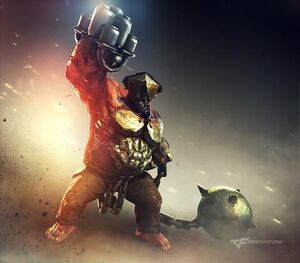 Retrieved from "https://crossfirefps.fandom.com/wiki/Boss_Arena/Engineer?oldid=133915"
Community content is available under CC-BY-SA unless otherwise noted.