BC-Axe is one of the earliest melee weapons, available in all CF versions.

BC-Axe is a notorious melee weapon with much better damage rates than the default Knife. It's primary attack or LMB is very quick to use, and can score a 1-hit kill in the head (with or without armor) or a 2-hit kill anywhere on the body, and has decent range. It can also kill several opponents if they are bunched together very tightly. The secondary attack or RMB has great reach and takes longer to execute, but can score 1 hit kill anywhere on the body except the legs, where it deals 80 damage.

BC-Axe and its variants are best used to score headshots with their primary attack; the player will find it easy to go for the head with its aim.

Comparing to the Kukri or Shovel, the BC-Axe has a faster primary attack rate but slower with secondary and shorter attacking range. It also takes longer to switch to other weapons, so it's not recommended for quick-switching with sniper rifles.

Dual Axes is a special variant available only in Hero Mode X expansion pack, used by Nemesis. Two Axes are held on each hand, with the right one facing sideway. It behaves similar to the Dual Kukri. 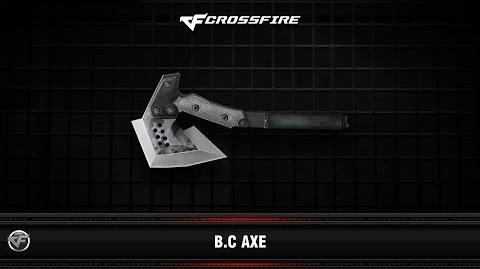