Armsel Striker is a combat shotgun in CrossFire.

Armsel Striker is a South African made semi-automatic shotgun. It is fed with 12 Gauge shells and is able to hold 12 rounds in its cylindrical magazine. Even though it is technically a semi-automatic gun, the user can hold down the fire button for continuous firing.

It has a very fast firing rate (behind the AA-12 and Vepr-12), strong firepower, relatively low recoil, and good accuracy. It has a wide pellet spread like the AA-12, which is normally a bad thing. However, the Striker deals good damage up to 20 meters, unlike AA-12 which rapidly loses damage at 10 meters and beyond.

This makes the Striker a very deadly "street sweeper" at close quarters, but at the medium range, it deals almost no damage at all.

The Striker is heavier than most shotguns and shells have to be inserted one-by-one (but it is possible to do reload cancel). Compared to other shotguns that reload one-shell-at-a-time, the Armsel Striker reloads very slowly.

Oriental Phoenix
Add a photo to this gallery 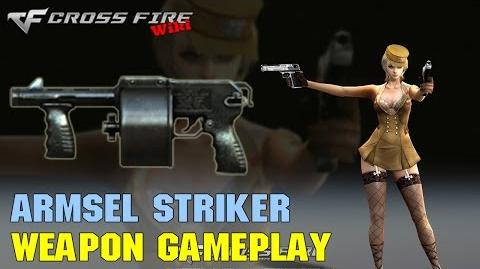