Arch-Honorary is a character variant of Arch.

The Arch has now looked nobler to fit the required rank that can obtain her. Both sides look similar to the original counterpart, but they have more gold details such as medals, arm rings. She can also use Furious Kick like VVIP characters, which never happens to any normal characters.

Unlike the original Arch or the Grand one, Arch-Honorary is now able to wear normal functional items such as Flash Guard or Smoke Helmet instead of wearing exclusive functional items.

This character is rank-restricted for Honor Marshal players, and only obtainable after reaching Level 5 Honor Marshall. 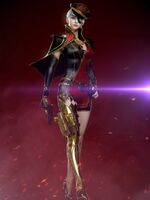 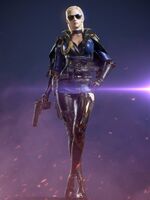 CF The Arch Honorary
Retrieved from "https://crossfirefps.fandom.com/wiki/Arch-Honorary?oldid=218840"
Community content is available under CC-BY-SA unless otherwise noted.