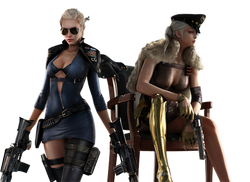 Arch is a unique female character featured in CrossFire.

Appears to be a high-ranking officer, Arch is an exclusive characters for Marshal (Level 100) players. The GR model wears a dark-blue skirt similar to FOX but much less revealing, in addition to a black scarf on her back, plus she wears round sunglasses. In BL form, she wears a Marshal cap and her skirt is red with no sleeves, plus she wears golden high heels.

Once bought, players will receive these equipment for use on Arch - they are exclusive and cannot be worn on other characters.

Also take notice that Arch cannot wear normal functional items such as Flash Guard or Smoke Helmet. Instead, they have premium items that come with those effects which players must buy to use.

GR Artwork (3)
Add a photo to this gallery

Retrieved from "https://crossfirefps.fandom.com/wiki/Arch?oldid=158419"
Community content is available under CC-BY-SA unless otherwise noted.