Anaconda-Blue Honor is a revolver variant of Anaconda.

Unique to other variants, this gun features a new model with bigger, double-barrel configuration and decorated trigger guard, making it similar to the Raging Bull-Gun Knife. It features a Blue Honor skin like the SPAS-12 Blue Honor, in addition to an Ammo Switch button mounted to the side that allows the gun to fire the secondary barrel when held down.

Static wise, the Anaconda-Blue Honor performs similar to other variants with a 10% damage boost, +2 ammo per cylinder and a slightly improved accuracy. In addition, it carries Slug Shot in its secondary barrel which players can use by pressing RMB. The Slug Shot is capable of scoring 1-hit kill up close and has perfect accuracy, but the effective range is very limited, forcing players to stay very close to their opponents to make the best out of this ammo type. 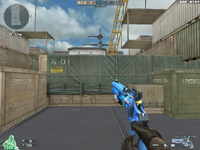 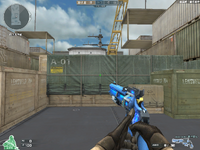 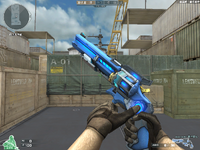 Toggling Slug Shot
Add a photo to this gallery
Retrieved from "https://crossfirefps.fandom.com/wiki/Anaconda-Blue_Honor?oldid=194819"
Community content is available under CC-BY-SA unless otherwise noted.