The AWM features red metal design which looks similar to Barrett M82A1-Iron Shark, along with the green light effect around the weapon; however, the light is still the same with firing. Uniquely, this weapon shares the similar HUD with AWM-A variants, like the Chroma one. It also has the unique scope texture like any VVIP Sniper Rifles. In terms of stats, this AWM variant is more or less the same with AWM-Infernal Dragon, including the drawing, reloading and the bolt-cycling speed.

Comparing to other AWM, this gun received two special effects that put it into the Anti-Mutant Weapons group - it's capable of dealing massive damage against mutants in Mutation Mode and variants, and each bullet induce a huge knockback effects that pretty much slow down mutants to walking speed. This makes the AWM-Red Frame Hawk even more effective than M82A1 and/or QBU-09 variants, since players can both snipe at long range and use the knockback effect to escape from chasing mutants.

While not technically an Anti-Zombie weapon, the AWM-Red Frame Hawk behaves like one as it has a crosshair in ZM and ultra-fast bolt cycling speed, allowing players to fire at zombies with no scope very fast. However, it doesn't deal massive damage toward zombies so the effectiveness of this is very limited.

3rd view
Add a photo to this gallery 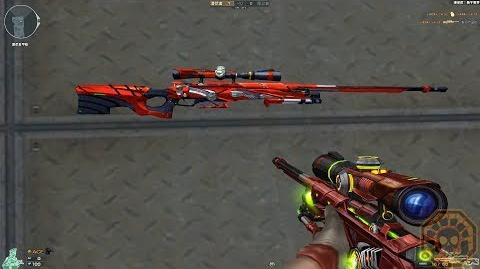 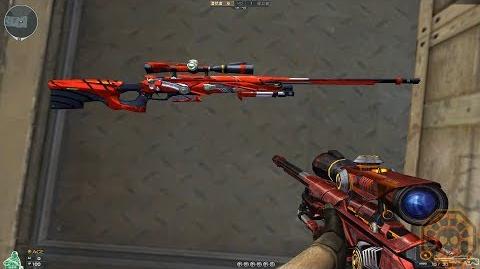