AWM-Mori is a sniper rifle variant of AWM.

It features a halloween theme of an anime character, with pumpkin pictured at the buttstock. This is the halloween version of CF Japan since celebrating 1st of November. It has no ammo increase because the original AWM in Japan has 10 rounds per magazine.

Except CF Japan, this weapon features the image of SIA instead of Mori on the weapon. 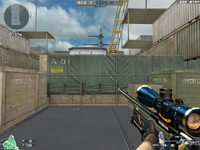