AR-57 is an assault rifle featured in CrossFire.

It was designed by AR57 LLC (formerly Rhineland Arms) and still produced by the same company.

This weapon has been converted with full automatic firing mode capability, so it can be used as a personal defense weapon.

This weapon is good in close range battle, since it has medium-high firepower and fast rate of fire. But this weapon loses it's accuracy on long range and also has high recoil.

This weapon is able to hold 50 rounds per magazine.

In-game model.
Add a photo to this gallery 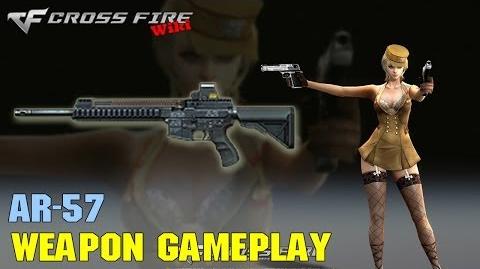 CrossFire - AR-57 - Weapon Gameplay
Add a photo to this gallery

Retrieved from "https://crossfirefps.fandom.com/wiki/AR-57?oldid=156769"
Community content is available under CC-BY-SA unless otherwise noted.