AK74 is an assault rifle in CrossFire.

The AK74 is an assault rifle developed in the early 1970s, by Russian designer Mikhail Kalashnikov as the replacement for the earlier AKM.

This weapon features several important design improvements, that were primarily the result of converting the rifle to the intermediate-caliber high velocity 5.45×39mm cartridge.

This weapon can be considered as an alternative for rookie players who wanted a similar rifle like the AK47. This weapon is much easier to control, also with reduced recoil, but it deals lower damage and slightly slower firespeed than the AK47 (except CF Vietnam).

This weapon can hold up to 30 rounds per magazine.

Halloween
Add a photo to this gallery

HUD (New Animation)
Add a photo to this gallery 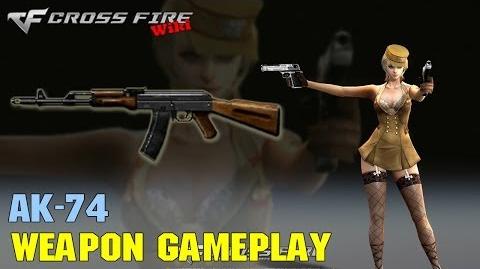 CrossFire - AK-74 - Weapon Gameplay
Add a photo to this gallery

Retrieved from "https://crossfirefps.fandom.com/wiki/AK74?oldid=192772"
Community content is available under CC-BY-SA unless otherwise noted.