It has a similar design Raging Bull-Gun Knife as it is capable of switching forms for both ranged and melee combat.

The Rifle Mode somehow has the hybrid design to 870P Breachers and AK12-Iron Spider and features full wallbang like. It features a unique set of animation as the player simply gets the weapon and the silencer is automatically extended; furthermore, it shares the same reloading animation with AK12. It comes with 35 rounds per magazine and has a fast and unique drawing/reloading animation.

The weapon can be transformed Knife Mode when the character removes the magazine and there will be a blue extended plasma blade. Unlike Raging Bull-Gun Knife, it has slow slashing speed.

This weapon can be CARRIED to any mode which disables any type of weapon (Melee Only, Ghost Mode,...). When entering, it will automatically transform to the Knife Mode and is put in the primary weapon slot. This means players can have two melee weapons, one in the Primary slot and the other one in the Melee slot (three if players also equipped Raging Bull-Gun Knife).

Shadow HUD (Knife Mode)
Add a photo to this gallery 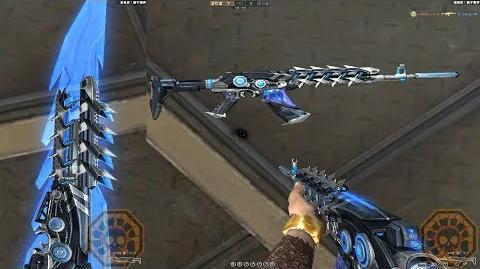