AK47-Buster is a specialized assault rifle variant of the AK47.

This gun underwent a lot of design change, including side way loading gate with the dual magazine, plus an MGL attached under its barrel. It has fast drawing/reloading speed and comes with 35 rounds magazine (+5) and enhanced accuracy.

Being an Anti-Zombie Weapon, AK47-Buster is equipped with 40 rounds magazine in Zombie Mode and it features a charging bar - when it's full, players can activate the MGL module and fire 6 grenades in an automatic-manner like.

This gun can be upgraded to Silver and then Gold variants, but unlike the Royal Guard weapons, players need to use ZM Stone instead of Mileage Point, which can be obtained when playing Crater 2 or Boss War. ZM Stones can also be bought on the Trade System for 1 set of 2 stones, players can earn 2 stones to combine the stones and sell to other players also.

Gold (LV3)
Add a photo to this gallery 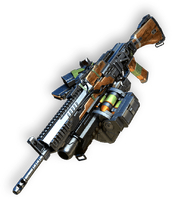 AK Buster - AI Mode
Add a photo to this gallery

CrossFire Vietnam AK-47-Buster
Add a photo to this gallery
Retrieved from "https://crossfirefps.fandom.com/wiki/AK47-Buster?oldid=203010"
Community content is available under CC-BY-SA unless otherwise noted.