AA-12 is a fully automatic combat shotgun in CrossFire.

AA-12 is a full auto shotgun that utilizes drum magazines for better ammo capacity. It has the largest magazine size among all stock shotguns with its 20 round drum magazine, but it has only one spare mag (another 20 rounds).

This shotgun has a very fast firing rate and is powerful at close range. However it suffers from very wide pellet spread, rapid damage dropoff as the distance increases, heavy weight, and a notably slow draw / reload speed. 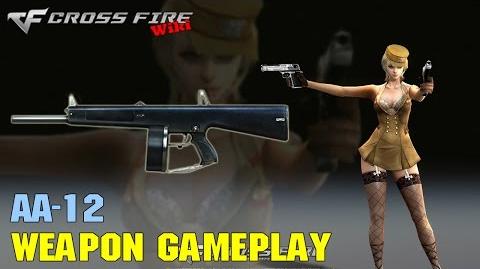 CrossFire - AA-12 - Weapon Gameplay
Add a photo to this gallery
Retrieved from "https://crossfirefps.fandom.com/wiki/AA-12?oldid=190076"
Community content is available under CC-BY-SA unless otherwise noted.